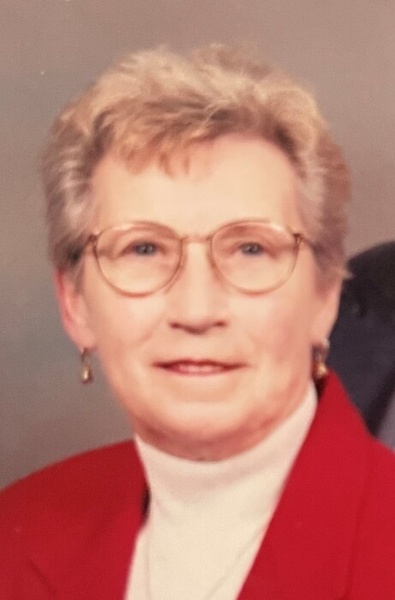 Darleen Mary Zimmerman was born on March 4, 1930 in rural Wells, the daughter of Emil and Angeline (Arnoldi) Budach.

She was baptized at her parent’s farm at birth. She attended St. Paul Evangelical Lutheran Church in Minnesota Lake where he was confirmed. Her education began by attending rural school near Wells through eighth grade at which time she enrolled in the Albert Lea school system where she continued her education and where her mother & siblings resided.

After marriage to Marvin Zimmerman, they moved to the Hollandale area for a short time, later living in Albert Lea the rest of her life.

During her lifetime, Darleen had a variety of occupations beginning with summertime babysitting at the age of 13. Later she worked beside her husband in the Hollandale area where they lived for three years. After the birth of their daughter in 1948 the family moved to Albert Lea.

After the move to Albert Lea, Darleen worked for several years at the Wilson & Co. also Land O’Lakes. Later she worked for several families doing housekeeping. In her forties she returned to school & obtained a one-year accounting certificate. After graduation she was employed at Albert Lea Family Y for 29 years first as a bookkeeper & later as Office Manager. Due to her husband’s failing health, she retired from that position in 2003.

Her passions included reading, doing crossword puzzles, going for walks, crocheting and spending time with her grandchildren. She liked to keep on the go. She loved to keep things neat & in good condition always trying to improve things.

Darleen was a member of Salem Lutheran Church where she belonged to of Sew n’Tell & Salem Circle, also SOS activities. She was also a member of the Senior Citizen Center, YMCA, Naeve Hospital Auxiliary, and Freeborn County Historical Society. She is survived by her grandchildren, Bradley and Rodney Peterson of Mesa, AZ and Kim Peterson of Phoenix, AZ; sisters, Marjorie Beiser, Gladys Tennis of Albert Lea,  brother-in-law (Bob) Wheeler of Michigan and sister-in-law, Sharon Budach of Albert Lea.

LIVESTREAM INFORMATION:  For those who would like to participate in Darleen's service via livestream, you can watch the service on Saturday, August 28, 2021 at 2:00 pm.  It can be viewed by scrolling to the bottom of this page, and "CLICK PLAY" to begin.  Please leave a message of support on our Tribute Wall to let the family know you were able to watch the service.  If you are having troubles with the Livestream, the service will be available to watch later in the day.

To order memorial trees or send flowers to the family in memory of Darleen Zimmerman, please visit our flower store.