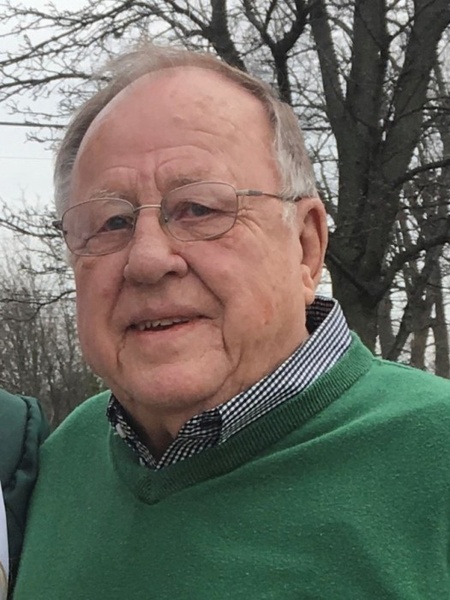 Funeral Services for Dale Newgard, of Albert Lea, will be held at 2:00 p.m. on Tuesday, June 4, at Grace Lutheran Church, Albert Lea. The Reverend Jennifer Gonsalves will officiate. Friends may visit with family one hour before services at the church. His years of service with be recognized with Military honors by Albert Lea Veteran’s Organizations. Dale died suddenly on Wednesday, May 29, in Worth County, Iowa. He was 83. Frederick Dale Newgard, always known as Dale, was born on February 18, 1936, in Albert Lea, the son of Loren and Edna (Hartz) Newgard. Dale attended Hartland Schools and then graduated from New Richland High School. He proudly served our country in the US Navy from 1954 until his honorable discharge in 1958. Dale was united in marriage to Arlyne Langlie on September 3, 1960, in Ellendale, MN. They made Albert Lea their home and to this union three children were born, Tammy, Tim and Vickie. He began his career in sales at the Coca Cola Co., then continued at Hiland Potato Chips. He later transitioned to over the road trucking, working for Wilson and Co, Murphy Trucking, later retiring from Yellow Freight. Dale was a member of Grace Lutheran Church and had been active with the American Legion. He was an avid sports fan and enjoyed following the Minnesota Vikings, the Minnesota Twins, but mostly all activities that involved his grandchildren. Dale will be greatly missed by his family, wife Arlyne of Albert Lea, his children and their families: Tammy (Brian) Jarnagin of Ames, Iowa, and their family Dr. Stephanie (Dr. Brian) Grondahl and Laina and Blaine, Alex Jarnagin; Tim Newgard (Terri Schifferle) and Emma of Corcoran, MN, Vickie (John) Newell of Ames, Iowa and children Hannah and Colin; sisters-in-law and brother-in-law: Elizabeth Newgard of Bloomington, MN, and Orville and Mavis Langlie of Ellendale, MN, and nieces and nephews. Dale was preceded in death by his parents and a brother Lowell “Dean” Newgard. Dale never knew a stranger as he always welcomed and engaged others into his world. His positivity, keen sense of humor and fun loving nature made him someone difficult to forget. Blessed be his memory!

Memorial suggested to Grace Lutheran Church or the American Legion.

To order memorial trees or send flowers to the family in memory of Dale Newgard, please visit our flower store.