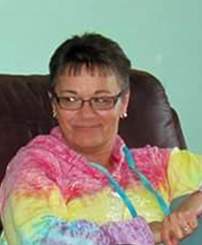 Camilla “Cami” A. Kussatz, 57, of Alden, MN, passed away after a courageous battle with cancer on Tuesday, July 30, 2019, at home, with her loving family at her side. Funeral services for Camilla will be held at 10:00 a.m. on Friday, August 2, 2019, at Bonnerup Funeral Service in Albert Lea, MN. Reverend Don Rose will officiate. Visitation will be from 5:00 – 7:00 p.m. on Thursday, August 1, 2019, at Bonnerup Funeral Service and one hour prior to the services on Friday. Interment will be at Greenwood Cemetery in Glenville, MN.

Camilla Ann was born on October 26, 1961, in Albert Lea, MN to Lowell and Ruth (Weitzel) Lawson. She grew up in Glenville and attended Glenville Emmons High School. Following, Cami began raising her family. On February 6, 1999, Cami was married to Troy Kussatz at Oakland Lutheran Church in rural Albert Lea.

Cami worked at a nursing home in Sleepy Eye, MN. Most of her working life was spent at Woodvale in Albert Lea as a supervisor. Most recently, Cami worked at Menards in New Ulm.

Cami was creative and always had a vision with her projects. She loved crafting and would do woodworking with her husband. She also enjoyed fishing and Harley rides. Cami’s loved ones consider her “the rock” of the family. She always made time for them, especially her grandkids. Cami is known for caretaker personality and listening ear. She continuously put others first—even until the very end.

Cami was preceded in death by her parents, Lowell and Ruth, and her sister-in-law, Diane Lawson.

To order memorial trees or send flowers to the family in memory of Camilla "Cami" Kussatz, please visit our flower store.