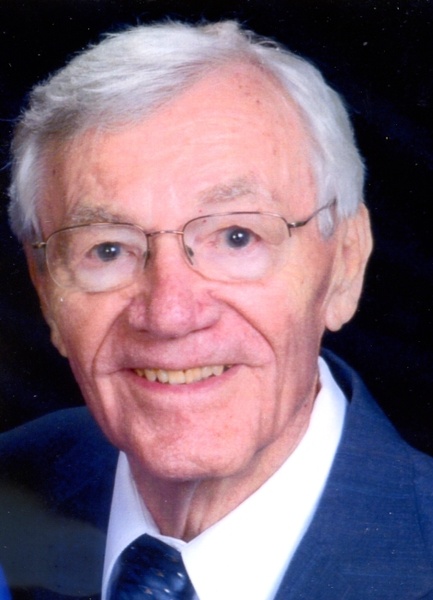 Funeral Services for Byron Glenn Spear, Jr., age 95, of Albert Lea, will be held on Thursday, October 10 at 11:00 A.M. at the Church of St. Theodore in Albert Lea, MN. The Reverend Kurt Farrell will officiate. Interment will be in St. Theodore’s Cemetery.  Military Honors will be accorded by Albert Lea Veteran's Organizations. Visitation is one hour prior to the service at the church.

Byron Glenn Spear, Jr. was born in Cherokee, Iowa on January 13, 1924, son of Byron and Nina (Berg) Spear. When Byron was two years old, his parents moved to Sioux City, Iowa where he spent the remainder of his childhood. In January 1943, he was drafted into the U.S. Army, remaining in the reserves and retiring as Major in the 1970’s. Byron pursued B.S. degrees in mathematics and physics with a minor in engineering at Morningside College in Sioux City, Iowa. While in college, he was president of the Engineer’s Club, president of Gama Iota Alpha fraternity, president of Sigma Pi Sigma (physics honor society), and president of his graduating class. While in Sioux City, Byron met Ruth Heimerman from Stacyville, Iowa, whom he married on August 25, 1951. Shortly afterwards, they moved to Oregon where he worked as a construction engineer for the Army Corps of Engineers. Byron and Ruth returned to the Midwest, where he attended Iowa State University and pursued education. He taught high school math in Eldora, Iowa and Albert Lea. Byron received a Masters of Science degree in mathematics from Mankato State University, was president of Southern Minnesota Teachers Association, and wrote curriculum for the Minnesota State Education Department. He retired from Albert Lea Public Schools in 1984.

During his time in Albert Lea, Byron was active in the Kiwanis Golden K-1, American Legion, Toastmasters Club, the Elks, the MEA and the NEA organizations. An active member of St. Theodore’s Church, he served as president of the church council, co-leader of St. Theodore’s prayer group, Extraordinary Minister of Holy Communion, confirmation teacher, and also participated actively in Legion of Mary, C.F.M., Teams of Our Lady, and Marian Rosary groups. Byron liked to play chess, bridge and golf; other interests included oil painting, sculpturing, reading, gardening, and traveling. He was a kind, generous, and devout Christian who loved to share his quick-witted humor, especially his puns. His welcoming and engaging personality impacted the lives of those he encountered.  Byron died on Friday, October 4, at his home.  He was 95.  Blessed be his memory.

To order memorial trees or send flowers to the family in memory of Byron Spear, please visit our flower store.