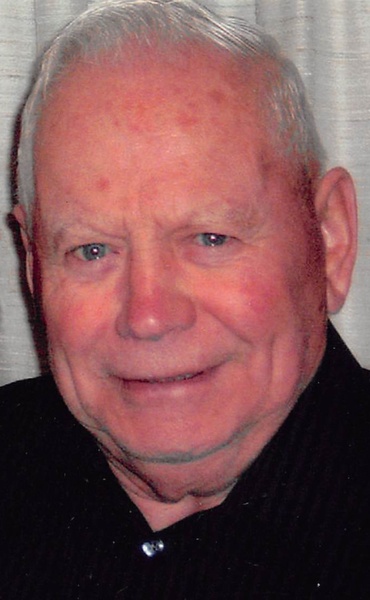 Memorial services for Burton O. Halvorson of Albert Lea, MN, will be held at 11:00 AM Saturday, July 6, 2019 at the United Methodist Church in Albert Lea. Pastor John Mitchem will officiate. Visitation will be held Friday evening from 5 until 7 PM at Bonnerup Funeral Service and one hour prior to the service at the church. Interment will be in Hillcrest Cemetery Albert Lea, MN. Burton died Monday, July 1, 2019 at his home in Albert Lea. He was 88 years of age. Burton was born August 28, 1930 in New Richland, MN, the son of Olaf and Leona (Heckes) Halvorson. He graduated from New Richland High School in 1948. He served his country in the US Navy. On February 9, 1957 he was united in marriage to Joyce Jensen in Clarks Grove, MN. Burt began working at the young age of 13 as a farmhand and had been employed for 35 years as a truck driver for the Wilson Co./Farmstead and then for Piepho Freight Service for 8 years retiring in 1992. Burt and his wife Joyce of 62 years were very active in their church. Burt mowed the lawn and worked at funerals along with volunteering with office needs. He faithfully delivered for Meals on the Go for almost 25 years, only stopping at the age of 88 for health reasons. Burt was known for keeping a meticulously groomed lawn. He loved putting puzzles together, listening to waltzes and “Old Time” polka music along with watching old westerns. One of his proudest accomplishments was hand-digging the basement of their home. He hoped his grandchildren would remember him for being honest and hardworking. Burton is survived by his wife Joyce of Albert Lea, MN, daughters Cindy (Kurt) Smeby of Austin, MN, Connie Adamec of Duluth, MN, and Joni (Scott) Bidne of Emmons, MN. Grandchildren include Kevin, Kendra and Kallie Smeby, Drew and Abbi Adamec, Dalton and Alaina Bidne. Surviving sisters Betty Nelson of Albert Lea, MN, Shirley Halvorson of California, Linda Graham of Alaska and Barbara Peterson of Colorado, sisters-in-law Millie Jensen of Albert Lea, MN, Janice Morreim of Manchester, MN, and Darline Jensen of Clarks Grove, MN, brothers-in-law Adrian Jensen, Denny (Mary) Jensen both of Albert Lea, MN, and many nieces and nephews. He was preceded in death by his parents, son-in-law JB Adamec, brother Jerome Halvorson, sisters Marie Halvorson, Genelle Stuckey, mother and father-in-law Merrill (Lily) Jensen, and brothers-in-law Elwood Jensen, Allan Jensen, Richard Laird, Leonard Stuckey, Rollie Peterson, Howard Nelson and Glen Graham. Memorials preferred in lieu of flowers to Mayo Health Systems Hospice, United Methodist Church or donor’s choice.
To order memorial trees or send flowers to the family in memory of Burton Halvorson, please visit our flower store.