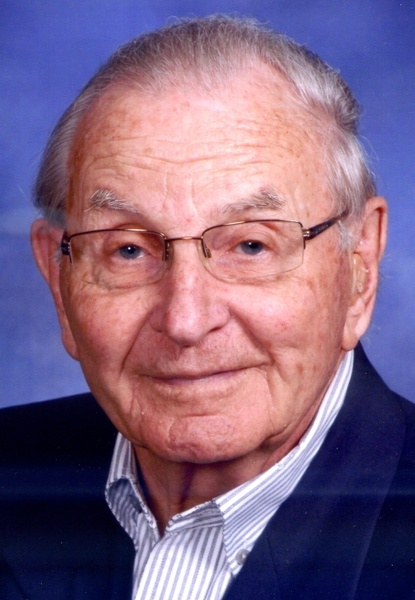 Memorial Services for Arthur R. Ludtke Jr., of Albert Lea, will be held at 11:00 A.M. on Monday, July 22 at the First Lutheran Church in Albert Lea. The Reverend John Holt will officiate. Interment will be in Graceland Cemetery. Military Honors will be accorded by Albert Lea Veteran’s Organizations. Visitation will be from 5-7 on Sunday, July 21, and one hour before services at the church. Art quietly left his earthly home on Saturday, July 13, 2019, at St. John’s Lutheran Home in Albert Lea.

He was born on February 26, 1926, in Walters, Minnesota the son of Arthur R. and Pearl (Katzung) Ludtke Sr. He graduated from Albert Lea High School and then proudly served our nation in the US Navy. Art served from June of 1944, until his honorable discharge in May of 1946. Art and Donna Ingvaldson started their life together on September 26, 1948 at First Lutheran Church. Art owned and operated Clarks Grove Elevator Inc. until his retirement in 1996. In early years, Art and Donna enjoyed showing English Saddle Horses. His joy for serving was evident in the many ways he volunteered. He served on many committees and boards within his industry as well as his community. He had served as Albert Lea Chamber President for 2 terms, the Albert Lea District School Board for 8 years, many offices at First Lutheran Church and its’ Council, and volunteered on the Clarks Grove Fire Department. He continued his involvement well into his 80’s by serving on the Watershed Board for 8 years. Art is survived by his wife of 70 years Donna, his children: Craig (Brenda) Ludtke of Albert Lea, Paul Ludtke of Rochester, MN, Kathy Ludtke of Eden Prairie, MN, Kristin (Gil) Irey of Waterloo, IA; grandchildren: Mollee (Joe) Tscholl of Albert Lea, Marcus (Jordi) Ludtke of Elko, MN, Brent Ludtke of Portland, OR, Brianna (Christian) Swanberg of St. Paul, MN, Brooke Ludtke of Eden Prairie, MN, Jamee (Derek) Bohlen of Fountain Hill, AZ, Jake (Shannyn) Irey of Lakeville, MN; great grandchildren: Andrew, Seth, and Zack Tscholl, Griffin and Tanner Ludtke, Brooks and Ella Bohlen, Nash and Nolyn Irey; sister Marlene Behle of Albert Lea, sister-in-law and brother-in-law Karen and Tom Hovde of Albert Lea and several nieces and nephews. He was preceded in death by his parents Arthur Sr. and Pearl Ludtke, brothers-in-law and sisters-in-law: Roger Behle, Elwood and Norma Ingvaldson, Irene and Herman Myre and Jennelly and Robert Groe. “Bumps” as he was affectionately known to many, lived his life with great integrity. His great love for Jesus was always reflected by the love he shared with his family and community and his unending gentle, helpful presence.

To order memorial trees or send flowers to the family in memory of Arthur Ludtke Jr, please visit our flower store.