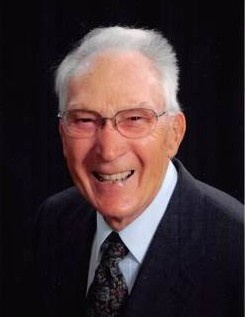 Arlo R. Blumer, 89, of Albert Lea, died on Saturday, May 18, 2019, due to the ravages of Multiple System Atrophy. Memorial Services will be held at 1:00 p.m. on Sunday, June 9, 2019, at First Presbyterian Church in Albert Lea with visitation one hour prior. Rev. Dwight Netzer will officiate. A private interment with military honors will take place at Lakewood Cemetery.

Between the Great Wars, in the midst of the Dust Bowl, and on the brink of the Great Depression, Arlo Roslyn Blumer was born June 6, 1929, on a farm on the South Dakota prairie to Mae Mundall Blumer and Fred Blumer.

Arlo was forged by the forces of his time. He was a farm boy with a strong work ethic, a love of reading and art, a creative and brilliant mind, and big dreams for his future. He relished learning and knew from an early age that he would be a physician.

Arlo graduated from Westmar College in LeMars, IA in 1951, matriculated to the University of South Dakota for the first two years of medical school, and finished his medical education at Temple University in Philadelphia, PA. Arlo completed general practice and surgery internships at the Los Angeles County Hospital and the Long Beach Veterans Hospital. While moonlighting in a clinic in Alhambra, CA, Arlo met his future wife—the beautiful Mary Ann Redmond, R.N.

Because the United States Army had deferred its intentions to draft him while he finished his medical studies, Arlo was beholden to offer himself to the Army at the conclusion of his internships. Low and behold, the Army had plans for him! Arlo sprang into action and proposed to Mary Ann. They married in Pasadena, CA on March 3, 1956, and shipped out to Asmara, (Eritrea) Ethiopia in July 1956. There, at Kagnew Station, a U.S. Army communications base, the young couple began their married life, which was to last more than 61 years. Captain Blumer was a medical officer in charge of the base hospital. Arlo and Mary Ann spent two wonderful years in Africa, made lifelong friends, and traveled widely. They returned Stateside in the fall of 1958 with baby Jody in tow.

They chose to live in Albert Lea, MN where Arlo joined four doctors at the Albert Lea Clinic. He had a busy practice, a growing family, a house on Fountain Lake, and a community he and Mary Ann came to love. Arlo was a 50-year member of the First Presbyterian Church. Civically involved, he was a Shriner, a Kiwanis Club member, a Mason of the Western Star Lodge #26 since 1965, and a member of the Toastmasters. He was also active in the State and County Republican Party. His involvement also included being a 50-year member of the MN Medical Association, a Charter Diplomate of the Family Practice Board, and a long-term board member (sometimes chair) of both Naeve Hospital and Medical Surgical Center, later known as the Albert Lea Clinic. He maintained his artistic pursuits and delighted in parenting his six active children.

Arlo ensured that his children were exposed to multiple activities including sports, art, music, animal-raising, farming, gardening, and more. Faith and community service were most important to Arlo and Mary Ann. Because the couple loved to travel and thought it important that their children see the U.S. and Canada—they did! By car and camper, with picnic lunches, the Blumers traveled each summer.

Arlo played the piano by ear and sang while he played. Arlo was a voracious reader. He often recited poetry and even composed poetry for special occasions. He was often found swinging clubs on the golf course and capturing memories behind the camera lens.

Arlo was beloved by his patients, the clinic and hospital nursing staff, and was admired by his colleagues. He took great pride in his diagnostic skills in a time before the fancy machines, and especially enjoyed delivering a prolific number of babies.

At 58, Arlo reduced his medical practice to half-time and entered William Mitchell College of Law in St. Paul, MN. Three semesters short of graduation, he decided that he really did wish to retire, and he and Mary Ann began to travel south in the wintertime. They eventually chose Pharr, TX in which to pitch their tent, and spent 22 winters there until health considerations brought them home to Albert Lea.

Arlo was preceded in death by his beloved Mary Ann; his parents; his brothers, Lavaine and Rodney; and his sisters, Deanna Brinkman and Sally Enck.

He is survived by his six children and their spouses: Jody Blumer; Karen and Mark Smed; John and Jennifer Blumer; Barbara and Tom Corcoran; Elizabeth and Rick Hafer; and Paul and Terri Blumer. His precious grandchildren are: Lucas and William Ramsey; Annika (Joel) Schwenzfeier and Alik Smed; Holland, Sam and Eleanor Blumer; Alayna Sigurdson and Weston Hafer; and Andrew Blumer. Arlo’s sole surviving sibling is Marileen Blumer. And his dear, dear friends—how he adored you all!

Our family is eternally grateful to the Mayo Clinic Hospice staff who have cared so lovingly for both Arlo and Mary Ann, and for our treasured caregivers who made it possible for our parents to remain in their home.

Arlo’s passing leaves an enormous void in our hearts and in this world, for he was a good, kind person who genuinely leaves this Earth in better stead than when he entered it. Goodbye dearest Papa, Grandpa, Uncle, and Friend. Godspeed.

Memorials may be directed to First Presbyterian Church in Albert Lea, Mayo Hospice, or a charity of your choice.

To order memorial trees or send flowers to the family in memory of Arlo Blumer, please visit our flower store.