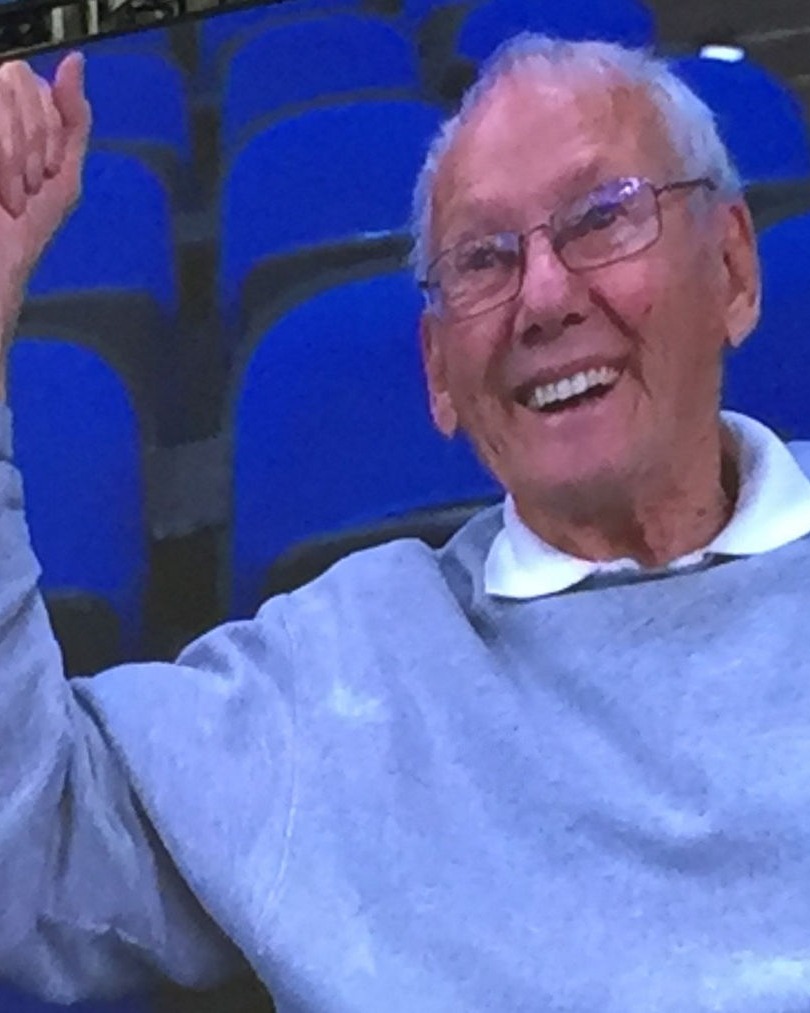 Andrew “Andy” Olaf Dyrdal of Albert Lea, beloved father and grandfather, passed away on November 24th at the age of 99.

Andy was born in Albert Lea on April 17th, 1923, to Theodore and Agnes Dyrdal. He was raised in Lerdal and went to Hoidal School, a one-room country schoolhouse, before graduating from Albert Lea High School in 1941. Following graduation, Andy and a friend drove a Ford Model A to Los Angeles and began working at Lockheed Aircraft Company. Shortly after, the attack on Pearl Harbor led to the U.S.’s entry into World War II and Andy was drafted into the Army Air Corps, serving as a control tower operator. Andy was stationed first in Paris and then St. André, France, until V-E Day. Later in life, when shaking hands with others, especially his grandchildren, Andy would pull one finger back and joke that he "lost it in the war.”  After returning to Albert Lea, Andy worked as a bell hop at the Hotel Albert and as a shoe salesman at Skinner-Chamberlain before settling into a long career as a mailman. He would end up walking the same route for 30 years, while becoming a cherished part of that neighborhood.

Andy met his future wife, LoAnn, at a high school basketball game and courted her by making silly faces from across the gym. The two married in 1950 and had two sons. Andy and LoAnn were passionate sports fans, especially about basketball, and attended many Minneapolis Lakers games together. The couple were especially fond of the Minnesota Gophers and had season tickets to football at the Metrodome. Andy and LoAnn followed Gophers team all over the county to watch them play in tournaments and bowl games, including the Rose Bowl in 1962. Andy was an eternal optimist about all things in life but especially sports. Andy cared for LoAnn until her death in 2011 but later found love again with longtime family friend Demita “Dee” Westum.  Andy was proud of his Norwegian roots and traveled to Norway twice to visit friends and family. He loved to golf, making holes in one twice and shooting his age at 89 years old, as well as dance, especially the waltz and polka. Andy danced often with LoAnn at the Eagles Club in Albert Lea and later at Robert’s Western World, his favorite place in Nashville, while visiting his grandson. Andy had an infectious love for life, with joy and kindness that left a lasting impact on all those that crossed his path. He was the heart of his family, a heart of his community, and represented the best of humanity.

Andy was preceded in death by his wife, LoAnn; parents, Theodore and Agnes; and brothers Paul and Teddy.

Services for Andrew will be held on Friday, December 9, 2022 at 2:00 PM at Bonnerup Funeral and Cremation Services in Albert Lea, MN; Pastor Shane Koepke will officiate.  A visitation will be held from 12:30 PM – 2:00 PM prior to the service. Interment will be at East Freeborn Cemetery in Albert Lea, MN.

To order memorial trees or send flowers to the family in memory of Andrew "Andy" Olaf Dyrdal, please visit our flower store.