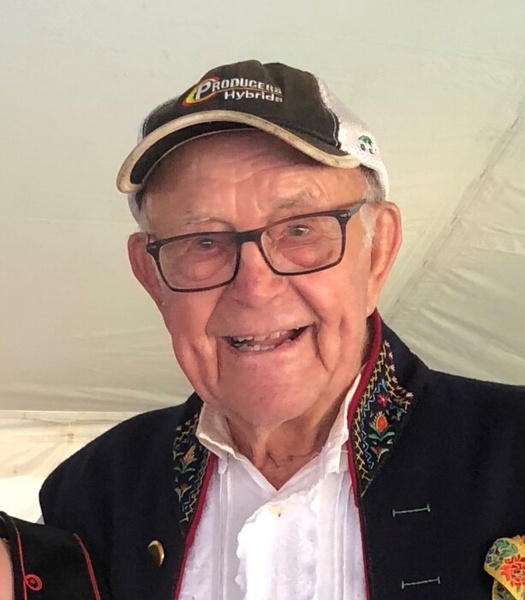 Over the course of his 92 years on earth, Alton Leo Krikava did a lot. He was a farmer, a tinkerer, a world traveler … and a husband, a father, a grandfather and a great grandfather. He died of natural causes in Albert Lea on the morning of April 24, 2021.

A Memorial Service will be scheduled at a later date.

Alton was born on October 26, 1928, on the farm where he lived and worked for most of his life. He was the fifth of six children borne to James and Blanche (Mudra) Krikava. Czech was commonly spoken in their home, and Alton learned to converse in Czech, an ability that would serve him well in later years.

He attended Albert Lea High School. After graduating, he met and married Marie Pieper who would be his wife for 67 years. He always said that she was the love of his life, and that he was the luckiest man alive to have gotten her. They lived for a short time in a small house at the edge of Myrtle, Minn., before moving to the Krikava farm in Hayward Township. There they raised a family and ran a successful crop farm.

Alton had a love for the machines that were needed to run the farm. He had a knack for maintaining them and fixing them when the inevitable breakdowns occurred. His improvised repairs were driven by urgency and necessity. If a tractor or harvester broke down at a crucial time, it was quicker and cheaper to weld a broken gear or jerry rig a solution, rather than driving into town to buy a part that would have been more expensive and likely would have delayed the farm work that needed to get done.

He also was an avid woodworker. Working primarily in the winter when the fields were frozen, he built many pieces of furniture for the family’s farmhouse. Many of those pieces now grace the homes of his children and grandchildren.

After retiring from farming at age 62, Alton and Marie embarked on an extensive campaign of world travel. They frequently traveled to Prague in the Czech Republic where they did genealogical research, reconnected with distant relatives, and made many new friends. One of their Czech friends was a travel agent who booked them on several tours including Egypt, Tunisia, Portugal, Greece, and the Adriatic. They were the only Americans amongst the Czech vacationers.

Alton was a devout member of the Lutheran Church. He and Marie were members of St. Michael's Lutheran Church of Prague (Evangelická církev augsburského vyznání v České republice, český sbor pražský). Even after they were unable to travel, the Czechs would not allow them to remove their names from the membership rolls.

Alton lived a pragmatic and level-headed lifestyle. He never got too excited about good news, since he recognized that it would be fleeting. By the same token, he never got too worked up about bad news. He and Marie managed to live independently on the farm nearly until the end. But ultimately, health concerns and age prompted them to move to town.

In 2018 they moved to Thorne Crest Senior Living Community in Albert Lea. Marie died there shortly after they moved in. Alton considered moving back to the farm alone. But he recognized the difficulty of managing alone there and decided to remain at Thorne Crest where he made many new friends. The family wishes to thank the staff at Thorne Crest for the care provided to Alton and Marie.

Alton was preceded in death by his parents, his wife, brother Leonard, sisters Sylvia, Helen Justis, and Gladys Lang, and grandson William Francis Bodine. He is survived by sister Ilona Biddington and by children Steven Krikava (Linda Singer) of Edina, Dr. Joan Krikava (James Bodine) of New Ulm, Rev. James Krikava (Peggy) of Prague, CZ, Michael Krikava (Martha) of Stillwater, and Richard Krikava (Shannon) of Cloquet. He also is survived by 13 grandchildren and 15 great grandchildren, and many nieces and nephews. In lieu of flowers, the family prefers memorial donations to the Friends of the Bohemian Brick Hall, 308 S Broadway St, New Ulm, MN 56073-3119, or a charity of the donor’s choice.

To order memorial trees or send flowers to the family in memory of Alton Krikava, please visit our flower store.