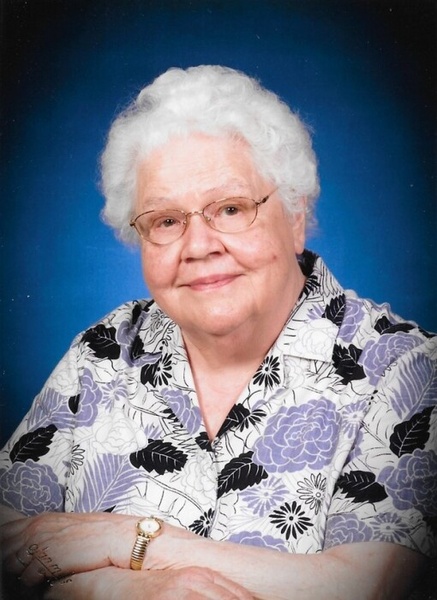 Agnes Boss of Albert Lea, Minnesota passed at Eventide Living Center, Moorhead, MN on May 5, 2021. Funeral services will be held at 11:00am on Wednesday, May 12, 2021 at the First Lutheran Church - Albert Lea with a visitation one hour prior to the service. Interment will be at Hillcrest Cemetery in Albert Lea, MN. A livestream of the service will be available on her obituary page starting at 11:00AM.

Agnes Emogene Gronlund was born and raised in Obert, Nebraska in 1923 to Anna and Edward Gronlund.  She was the fourth child, younger sibling of sister, Rachel, and brothers, Burdette (Bud) and Donald.

She loved growing up on the farm and loved playing with the kittens and making believe in the area of the woods around the home and barnyards.  She loved school and was a bright and eager student.  Her favorite subject was art of any kind. She graduated from high school in Obert and continued her education at Wayne State Teachers College. She received a teaching certificate and taught in a one room schoolhouse for a few years.

During WW II, she joined a friend in California and worked at the Air Service Command to support the war effort.  Her time there was cut short when her parents asked her to come home and work on the farm. With her brothers both in the military and stationed overseas, there was too much that needed to be done. She rode a train filled with young soldiers headed to the East Coast for deployment and had a great time watching all their shenanigans.  Shortly after returning home, news of D-Day reached them. She often wondered about those laughing young men and whether they had survived that event. Along with farm work, she also taught school again for a short time and then attended business school and went to work at Fairmont Foods in Sioux City, Iowa.  It was there that she met her future husband, Bert Boss.  After they married, they moved to Devils Lake, North Dakota where Bert had been transferred with Fairmont Foods. Their married life followed more transfers; to Davenport, Iowa; Sioux City, Iowa; and Moorhead, Minnesota.  Bert left Fairmont Foods in 1970 and they moved to Albert Lea, MN when Bert took a job as Clinic Manager.

Agnes was a homemaker and took her job of mom, raising her children very seriously.  She was always encouraging them in their schoolwork and activities.  As the children became older, she was able to find time to return to her creative interests.  She loved to paint and has left us with many pieces of art.  She also became skilled at woodworking, sewing and doll making.  She was commissioned by the Enchanted Doll World in Aberdeen, South Dakota to do a series of Presidents wives that were sculpted from clay.  Se enjoyed many years of making dolls from clay, cloth and wood.

She shared her painting talents by making back drops for the Doll Museum in Albert Lea and the Art Center floats in the 4th of July parade.

Agnes was proud of her Lutheran Faith and talked fondly of her growing up years in her Church and Sunday School.  She was unable to attend Church in person in more recent years but faithfully watched services on television every Sunday morning.

She was preceded in death by her husband Bert, parents, brothers and her sister.

To order memorial trees or send flowers to the family in memory of Agnes Boss, please visit our flower store.